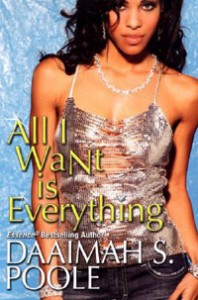 Despite being classified as a romance by my local library Daaimah S. Poole’s  All I Want Is Everything lacks one of the three key elements of the genre. There’s no hero here, unless you consider the heroine’s brother in that role. Reading All I Want Is Everything inspired a lot of thoughts about AAVE being defined as a failure of literacy. I don’t know how to interpret narrative choices that read to me like constant shifts in tense.  Playing with tenses can be integral to AAVE expression. (There’s a lot to unpack in this. It might be it’s own post.) So let’s lead with the knowledge that All I Want Is Everything has an inconsistent expression of time from the narrator. Let us also note the book is in first person. (I know. Me too. Persevere.)

I’d classify All I Want Is Everything under Morality Fiction. There’s a rejection of her humble beginnings followed by unexpected success and then a return to her humble beginnings culminating in rebuilding her life on a newfound humility. Pretty classic stuff. The portrayal of men interested me. Kendra’s brother (as I mentioned before the only one that would qualify as a romantic lead) is undergoing his own coming of age on a similar path. At the end of the book the two of them stand united as a powerful couple ready to face adversity. The love underlying All I Want Is Everything is between a man and a woman, but it is not romantically based. In fact there is no romantic relationship in Kendra’s life. Her understanding of consent is deeply troubling.

We meet Kendra first as a has-been ready to change her life. The book jumps through time. Next we meet the teenaged Kendra trying to hold her family together despite two deeply flawed parents. While Kendra is forgiving of the emotional abandonment of her mother (as opposed to the physical abandonment of her father) readers may be less so. Kendra has drawn a very short straw in the family. Having assumed the role of caretaker through personal preference, not birth order, Kendra struggles to balance her successes at school with the catastrophic failures at home. I really liked this section of the book. The young Kendra is identifiable, the family interactions realistic, and the lower working class struggle familiar. While Kendra dreams of moving up the economic ladder, neither she nor the author condemn the working class. The failures of Kendra’s family rests on failures of character and opportunity, not worth.

As a result of tragedy, Kendra is sucked into a trap of dependency via a dead-end relationship. Here her brother has his first major sin. He’s aware that his boy is no good, but he takes no effort to protect her.  Kendra does not made a choice. Kendra is exploited. Although the book is at pains to paint this as a decision Kendra makes I’d argue otherwise. Poole equates  pleasure and dubious consent with acceptability in a way I’m not in agreement with. Every sexual choice Kendra makes is based on rape culture dynamics. Her first boyfriend is an obvious predator. Her second is no better and her third is blatantly so. Kendra and the author excuse all of this by her finding pleasure in the encounters and by her being worn down into acquiescence. Enthusiastic consent is a standard all of Kendra’s relationships cannot meet.

From a chance encounter with former classmates, Kendra is pushed forward into the music business. This is a Cadillac Records fairytale of  being signed. Money pours in, labels rush to meet needs, Kendra is rolled onto a red carpet without a moment’s pause. Stylists, publicists, free apartments, all are Kendra’s for the asking. Swept along in the rush, she faces the dual pressure of her family commitments and her new professional ones. Kendra quickly slips into self destructive habits because she’s confused talent with worth. This Kendra made the least sense. The teenage Kendra wouldn’t be so easily turned. The early twenties Kendra would be aware that free rides aren’t free. This Kendra, however, asks few questions. She sneers at those she considers less worthy of attention than herself. She forgets to hustle and starts to party. We all know that party girls never get happy endings. Soon Kendra is back home and facing the same problems she did before.

Her faith in her family has once again clipped her wings, although the book presents it as a failure on Kendra’s part. I sympathized with this Kendra as well. The skills you need to survive are not the skills you need to succeed. Kendra’s brother, filled with remorse for his lesser roles in her failures, recognizes this. He tells Kendra that he’s here to help her begin again, to atone for his failures. Poole offers a somewhat confusing message in telling Kendra you can’t carry everyone up with you yet also maintaining that it’s Kendra’s responsibility to try. Once Kendra has someone in her corner (as opposed to a community pulling on her skirts) she’s free to rise again. Contracts mysteriously disappear as Kendra starts to hustle for herself instead of for her family. The book closes with a HFN Kendra realizing her dream of personal success while providing her family new opportunity. Although the book feels poorly written the character drew me past several DNF points. All I Want Is Everything is a fast paced read with plenty to unpack.

View Spoiler »Her first relationship is absolutely rape. Kendra is a newly homeless teenager staying with her brother’s friend. He has non-consensual sex with her. Kendra convinces herself that because it was pleasurable it’s love. She was not interested in him prior to the encounter. He locks in a paycheck, a sex toy and a caretaker for his father. She tells herself this is her man and spends much of the book trying to please or excuse him. Even when he cheats, even when he uses another woman as a baby machine. Despite Poole’s pains to present this as a bad relationship it read as predatory and wrong. Her second relationship is similar. Kendra is pushed by a man she has repeatedly declined. He fails to respect her boundaries. His aggressiveness is shown as desirable, with Kendra ultimately reaching out to him in agreement. Kendra paints this as a good relationship because he is in a better financial position than her prior user. The second dude is also out to control her. Kendra’s third relationship is not a relationship at all. She effectively agrees to prostitute herself out of sheer desperation. Although the effective difference is the introduction of a third party and Kendra’s inability to persuade herself she has romantic feelings for the individuals, the relationship dynamics are the same. Instead of convincing herself she’s in love, Kendra realizes she’s hit bottom and despises herself. She turns her back on true professional opportunities and returns home. None of the sexuality in All I Want Is Everything reads as healthy. « Hide Spoiler

Final Assessment: Morality play about finding yourself and working for your happy ending. Still enjoyable. C+

2 Responses to “All I Want Is Everything by Daaimah S. Poole”