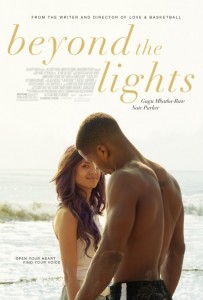 If you follow me on Twitter you might have seen my frequent rants about wanting more romcoms/romantic movies. They are making an Insidious 3 and a Woman in Black 2 for Christ’s sake and don’t even get me started on how Disney’s acquisition of Marvel has doomed us to watch superhero movies starring white guys named Chris until the end of time. If you think I’m joking, just remember that Disney’s Snow White came out 80 years ago. They have a lot of catching up to do in the Dude Bro department. I’m so sick of this I didn’t even bother to see Guardians of the Galaxy in the theaters, and Dude and I usually make a point to go see all the “big” summer movies.

Anywho, now that Selfie has been cancelled and I’m only left with Jane The Virgin to satisfy my romance needs, I knew I needed to see Beyond the Lights. This movie first came to my attention over the summer. I hate that they are running posts for Lady Gaga’s whack ass ARTPOP tour, but Tumblr ads do work. Then I saw it was by the same woman who wrote and directed Love and Basketball, one of my favorite movies ever-of-all-time. I also loved Belle (2013) and I loved Gugu Mbatha-Raw in it. I’m a sucker for actresses who have mastered the art of crying on camera and Gugu is the lord lady pimp of the single tear. Seeing her in a contemporary piece seemed like a no brainer. I ventured out on a school night because I couldn’t wait to see Beyond the Lights any longer.

I will say this right now, Beyond the Lights is a beat by beat, textbook romance. Like if you handed this script over to RWA they would slap a Certified Romance sticker on it. I mean tortured pop star falls in love with a hot cop who has a cute dog??? COME ON!

We meet Noni (Mbatha-Raw) a bi-racial little girl, around the age of ten, with her white mother, Macy (Minnie Driver). Macy has no clue how to do Noni’s hair, but due to an upcoming talent contest, Macy seeks out a black hair dresser to help with Noni’s hair. The hairdresser is played by Deidrie Henry who you might know as the Popeye’s Chicken lady. You have no idea how happy I was to see this woman not hocking fried chicken. Anyway, Noni goes to the talent competition, sings a Nina Simone song with a voice that sounds like little baby black Jesus, but doesn’t take home the title. Macy is not having this shit and this lays the groundwork for years of pushing Noni to be number one. 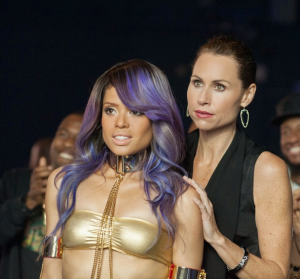 Flash forward 10+ years and Noni is on the brink of her major solo career. She’s been featured on three singles with a big name white rapper. She’s unhappy as balls, but she’s about to get that big pay day so she has to continue to play her part. It became pretty apparent rather quickly that Noni is not going to play her part. Once back in her hotel room, she attempts suicide off her balcony. This isn’t a spoiler. It’s in the trailer.

Enter Officer Kaz Nichol (Nate Parker). He’s filling in on her security detail for the night and saves her from the 12 story drop. It’s a depressing as shit meet-cute, but damn it worked. From there the movie goes on quite the emotional rollercoaster. Noni battles her mother’s ambition and her own ongoing depression, along with the fact that she still wants to be a singer. This movie gets 544588 points alone for portraying a black woman with depression in an honest way. 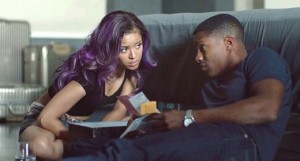 Kaz is on the road to local political office, being pushed forward by his father, Captain Nicol (Danny Glover). Parts were down right hilarious. The dialogue was snappy and at the right times, perfectly cheesey. There’s a karaoke scene and thank the music supervisor, a scene that includes almost the entirety of Beyonce’s Drunk In Love. Did I mention this is a textbook romance? About 80% of the movie is scenes between Kaz and Noni and holy shit those scenes were perfect. They both expose their fears and insecurities, big and small. There are little gestures and big gestures, cute shit comes full circle. Declarations of love, kissing. So much kissing and really great sex scenes that actually bring about character development. Ugh, it was perfect.

Anyway, I HIGHLY recommend this movie. If you like romance, fucking see it. If you’re looking for a couple hours to kill, GO SEE IT. The behind the scenes of the entertainment industry portion of the film is very well done, as is the soundtrack. And really, parts of it are very funny. Plus Nate Parker is ripped as shit and he takes his shirt off a bunch.

Final Assessment: I will be buying it when it comes out on DVD/Digital. Grade: An enthusiastic A+ 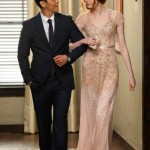