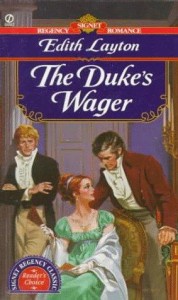 Edith Layton’s family recently re-released this as an ebook, so I thought I’d post my review of the old Signet edition. Romance readers often talk about their “conversion kits” to refer to romances they’d recommend to their genre-critical friends and family in an effort to convert them into a fan. The Duke’s Wager features prominently in mine as an example of the genre at its best. Sparkling dialog and complex characters combine to create a delightful story of meeting someone who makes you want to be a better person. It’s a little pricey for a re-issue at $5.99, but if you’ve never read it before, I promise you it’d be money well-spent.

In her enthusiasm to see the sights while she’s in London, country mouse Regina Berryman accidentally attends the opera on the night where mistresses and the demimonde are on display. Dressed smartly in the fancy clothes her uncle bought her, she unwittingly draws the attention of two of London’s most notorious libertines – the Marquess of Bessacarr and the Duke of Torquay. When the duke approaches her to whisper a proposition in her ear, she flees the opera house in a hurry. Torquay, however, is undaunted, and becomes determined to have her as a mistress. Bessacarr, being none too fond of Torquay, becomes determined to have her as well, if only to thwart the duke. Thus begins a twisted love triangle battling to corrupt the innocent Regina.

The book is brilliant in that both men are absolutely despicable in the beginning. Early on, Regina is left completely penniless by her uncle’s untimely death. Torquay and Bessacarr both exploit this to their own benefit. Torquay by getting her thrown out of her home and abducting her to try to force her to accept his offer, and Bessacarr by taking her into his home under false pretenses and abusing her trust by pretending to help her find work. One is openly trying to corrupt her, while the other is doing it stealthily. Neither is concerned one whit for what Regina wants.

Regina is a delightful character. She’s penniless and powerless, but her well-developed sense of honor and self-worth prevents her from accepting Torquay’s offer. She refuses to live as someone’s object or pampered pet. She’s determined to live an honest, honorable existence, even if she must find employment. She was educated as though she were a son by her schoolmaster father and so meets Torquay’s sallies head-on, refusing to be taken as anything less than an equal. As it’s all she has left, she clings tenaciously to her dignity.

Layton makes expert use of dialog in the novel, using it to draw out who the characters are and why they act the ways they do. Whenever the duke encounters Regina, a war of words breaks out. The two have lengthy, wonderfully written discussions where, though he becomes more and more determined to have her, Torquay also begins to wish she never compromises herself. Eventually he starts to wonder if he even wants to win this game of his. Would she still be so appealing if she consented to be his mistress? What sort of person would that make him, as well, if she did?

I just loved watching these characters grow and change. No one ends this book the way they began, not even the secondary characters. Through well-crafted, meaty dialog we watch the characters struggle with their own senses of honor and self-respect. They all make miscalculations along the way, and though all three try, only two come out better people at the end. It’s a rare book that can write a character who manages to go from repulsive to endearing, but Layton pulls it off and makes it look easy.

Final Assessment: I couldn’t find a flaw if I had a gun to my head. Easily an A+.

3 Responses to “The Duke’s Wager by Edith Layton”