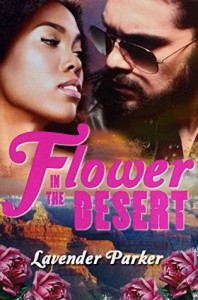 After our recent guest post by Jill Flower In The Desert was Twitter nominated as the second entry in our Let’s Read A Damn Book series. Lavender Parker is a new to me author but this cover was to die for. While disappointed it wasn’t a 1970’s set historical, there was just enough left of the carpeted Econoline van to keep me reading. Stylistically the book is divided into two sections, one a survival tale in the desert and the other a more traditional will they or won’t they in the city. I found the first half of the novella far more engaging than the second. Ruby’s efforts to survive and Jase’s compulsion to find her reminded me of early Linda Howard or mid-career Sandra Brown. The stakes were clear and the actions logical and considered, even when unwise. Parker had a good hand on the suspense. Ruby and Jase in the desert took on a timeless feeling despite being set in the here and now.

I was less enamored of their return to civilization. Ruby and Jase became less about their importance to each other and more a conventional erotic tale. Jase stands by Ruby, while also deciding he knows what she needs better than she does. Ruby accepts Jase’s frequently unfathomable actions without questioning them. Both build a relationship with the person in their head instead of open discussion. It’s hard for me to stay with a story where the hero and heroine decide they know what the other is thinking by visual or physical cues instead of clear statements of intent. I felt the ending was unearned and unexplained. A major life change is made without exploration of what that will mean to the most affected party. One partner essentially gives everything up on a whim.

As long as I’m quibbling, Parker also deploys one of my least favorite romance tropes – the meat craving vegetarian. Ruby became a vegetarian for weight loss (disguised as a health concern) because she has major body issues. Once stranded in the canyon, she dreams of meat and reflects not on how she denied herself a food group for reasons of vanity, but on the irony of her desire. Nope. Nopity, nope nope. It felt off to me.

Strange that in the middle of a waking nightmare, she craved meat. If she’d been in a more humorous mood, she might have laughed about the irony of it. As it was, she didn’t question it. She just dreamed of eating her imaginary lamb chops and didn’t feel an ounce of guilt. – Parker, Lavender (2014-07-22). Flower in the Desert (Kindle Locations 274-276). . Kindle Edition.

There is a subplot concerning Ruby’s son that is dropped too early. It doesn’t make sense and hints of cut scenes or dropped plot points. I also objected to a scene where Ruby, who has previously explained why not changing her name at marriage was important to her, does a complete reversal and seeks a name compromise. Jase hasn’t asked for it. It’s a little bit of an eye roll at the close of a downward spiral. If the first half of Flower In The Desert had matched the second, I would be waving my Lavender Parker fan club card high. All in all, still a read worthy of it’s amazing cover. Ruby may not have a HEA in Jase, but she deserves the HFN she leaves us with.

Final Assessment: Quick tale of survival and love between an FBI tracker and a capable woman. A-

11 Responses to “Flower in the Desert by Lavender Parker”