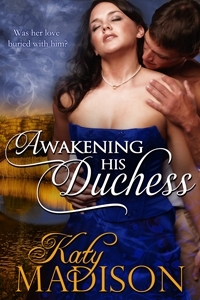 You guys!! This is the best and worst book ever!! I can’t wait to talk about it in totally spoileriffic detail! Awakening His Duchess is Katy Madison’s update of the traditional I-Was-A-(Spoiler-Alert)-Plantation-Novel!! Can you see me waving my hands around excitedly? It’s gothic! It’s racist! It’s progressive! It’s everything Ronco could make it! Now how much would you pay? But wait!! You also get my review! (Ok, even I am tired of exclamation points. Let’s get to it. You know I love me some Katy Madison) Everything about this book pays homage to 1970’s historicals. It’s like bodice ripper concentrate. Awakening His Duchess starts with a man being buried alive. Like, seriously. Dirt on the face, pounding on the box, the whole bit. We quickly find out he’s the third son of a Duke (because of course!) cruelly betrayed by the girl he’s been lying to but really wanted to marry.

She’s the daughter of a Haitian plantation owner and she’s French. (ZOMG!) Beau is swept off the canvas and   Yvette is stuck in the midst of revolution. (I’m not sure why I wanted her name to be Fleur through the entire book – the story must remind me of something specific from the earlier era of Haiti-set books.) With blood flowing all around her, she flees to England. England’s fine and all, but it hasn’t any bananas. Until Beau arrives!! (I’m sorry. He doesn’t bring bananas with him. He talks about them endlessly, but he’s just happy to see everyone but Yvette.) Wait, we’re getting ahead of ourselves – let’s head back to the revolution. Spoiler alert – it’s not going well for Yvette’s family.

Slaves who’d cared for her since infancy, who’d fed her, washed her face, sung to her, men and women she’d known her entire life had turned and butchered her family like they meant no more to them than the chickens for supper. – Madison, Katy (2013-01-24). Awakening His Duchess (p. 67). . Kindle Edition.

Now I’m just guessing, but if I had to lay my money down I bet the slaves had a much higher opinion of the chickens than they did Yvette’s family. Madison has it both ways here. Yvette has been a healer to the slaves, against the wishes of her family. She’s seen them whipped and killed. She knows their life expectancy is less than ten years. She’s seen families separated and she’s likely known of rape. Yet she still thinks in terms of loyalty. Yvette is repelled by slavery in England, but she’s fine with the life it gave her on the island.

Her father had been defeated by life in Saint-Domingue. He didn’t understand why he had such a hard time making a profit when other plantations had done well. But he’d met with more than his share of misfortune with his slaves dying off in droves. – Madison, Katy (2013-01-24). Awakening His Duchess (p. 165). . Kindle Edition.

Yea, that really sucked for him. But back to our hero and heroine! When Beau arrives he’s got a pretty wild story for his family. It seems that after digging his way out of the coffin Beau had the misfortune to become a white slave. Yvette heard rumors of such a man existing but assumed that the white slave was an albino. (With race being an artificial construct it’s not like the “white slave” was that unfamiliar to slaveholders. Passing just means moving away from people who know you’re supposed to be black. So the reverse holds true as well – proving you’re actually white would require people who know you are.) Beau blames Yvette for all of his misfortunes. What can keep these crazy kids together? Only a secret baby! Etienne, being a child who lives through a massacre, is not favorably disposed toward Africans. He’s frankly afraid of them. His early conversations with this strange Not-As-Dead-As-Maman-Said-Secret-Daddy tend to go poorly.

Paternal cop-out on Aisle Beaumont! Etienne is like, well there’s side All-Of-My-Family-Is-Dead, so I think that’s my side. Beau doesn’t want the kid to hate him so he equivocates a lot. I was concerned Madison was going to hit the White Savior drum a little too hard but she keeps it fairly low key. I mean, sure, Etienne owes his life to the slaves figuring out he’s Beau’s kid. Somehow Beau has managed not to smuggle a note out to the island’s government or his family but he has managed to teach his fellow slaves to read and write using the dirt and a stick. (He’s got access to charcoal and banana leaves but whatever, Beau.) There’s the bit where Beau alludes to having played a role in the Revolution. That’s about it.  So we’ve got The Good One and The Healer, placing both of our leads somewhat above the guilt fray. I wanted Madison to go a step farther and acknowledge that the sort of extreme wealth Beau’s father enjoys is based in more than traditional English farming practices, but she pulls back. Take this tea time exchange.

“You like sugar?” she asked, startled. He paused. “Don’t you?” “I don’t use it much since I’ve seen…” Her voice trailed off. He knew better than she what went into harvesting the crop and turning it into the product sent to market. The edges of his lips curled in a self-depreciating smile. “I’d hate to think my labors wasted.” – Madison, Katy (2013-01-24). Awakening His Duchess (p. 260). . Kindle Edition.

I liked this scene in it’s acknowledgement that slavery sustained their lifestyle but I loathed it for Beau’s reasoning. It’s a bit early for Yvette to have planted beets, but she could have become a beekeeper. If she truly objected to the cost of sugar, there were ways beyond refusing it at the table for her to make her feelings known. It’s a little unfair to expect it of her given our modern lifestyles are predicated on a different kind of slavery, but unfair is the reader’s favorite game. (Actually, here’s a little info on sugar farming today, in Florida, and it’s human cost.) Awakening His Duchess was a top read for me until everything came cascading down in the final quarter. While the Evil Guy Behind Everything is totally a staple of the 70’s romance, I’ve lost all taste for it. This particular Big Bad is completely illogical. There are a dozen ways his existence makes little sense. Maybe two dozen. His inclusion was an homage too far. Beau faces his fear, Yvette faces her past, and peril rains down around them. Love wins out and we all wake up safe and snug in our own epilogue. Wait! I totally forgot Mazi! (Don’t worry, for long stretches of the book everyone else forgets him too.) You know Mazi – he’s this guy!

Mazi is in the book so Beau can be grateful to him. He’s there to prove that the only difference between Beau and a slave who wasn’t third son of a duke (Mazi is considerably higher up the nobility chart) is skin color. Mazi arrives so Etienne can unlearn his racism and come to understand that black faces need not cause terror. In the 70’s we’d either never hear of Mazi again, he’d be a lifelong servant, or he’d bravely die protecting Beau without regret. In this updated version Mazi gets to return home (off camera). He is seriously and completely Beau’s One Black Friend.

4 Responses to “Awakening His Duchess by Katy Madison”