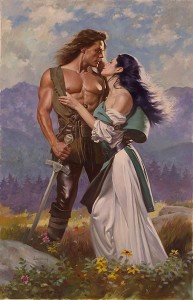 Today’s post is from Jessica Tripler, aka @RRRJessica. She writes about romance for Book Riot and at her personal blog, Read, React, Review. She’s also a Red Wings fan, but nobody’s perfect.

Sometimes when I’m talking about the romance genre with someone who doesn’t read it, I find myself trying to find areas of commonality between romance and whatever they like to read. With a biography or memoir reader I might talk about detailed characterization. With a friend who reads literary fiction, it might be the really lovely writing. With a mystery reader, the comfort of a satisfying ending. With a historical fiction fan, I might talk about those romances with an eye to historical authenticity. Worldbuilding in PNR with a UF or SFF reader. And so it goes.

I definitely like and appreciate all those things when I find them in romance, but they aren’t actually my personal favorite things about romance. It’s not easy to explain what makes a good romance novel really good for me, but I’ll try by saying it has to be emotional, uplifting, and romantic. Given these things, I can deal with historical inaccuracy, sketchy worldbuilding, and archetypal characters (although the believable happy ever after is a must). If I find myself diving in and not coming up for breath for 100 pages, totally transported by the journey of the main protagonists, I’m satisfied.

As a romance reader and big fan of the genre, I have been known to mock some romance novels, titles and covers being two of my typical targets. One scholar calls it “clowning” when fans mock some aspect of what they love. When a non-reader writes a post on ridiculous sexual euphemisms in romance I get irritated, but a similar post by a fan can be hysterical. The funny thing is, sometimes I read a romance and think, at the very same time, “this is so incredibly ridiculous”, and “wow this is so freaking awesome.”

In fact, I actually think it’s one of the special talents of romance writers to write a believable plot that, if I hadn’t read so much romance, I might think could only be the product of a mashup of mental figments of a person on hallucinogens who happens to be riding a rollercoaster while eating handfuls of Habanero chilis. And by “believable” I just mean you aren’t thrown out of the story and the book isn’t thrown at the wall. You keep going because something about the characters makes you care, and something about the wacky plot keeps you turning the pages to find out what happens next.

The prime examples that come to mind are from some of the great historical romances of the nineties. In Judith Ivory’s Beast, the hero is a French prince-slash-perfume magnate, blind in one eye, with a limp, who seduces his virginal fiancee on a transatlantic journey via cabin visits by cover of darkness by pretending to be an Egyptian pasha. In Laura Kinsale’s Prince of Midnight an English lady’s family is killed by a cult that comes to town so she dresses up as a boy and asks a reclusive former half-deaf highwayman named Sophocles with balance problems and a pet wolf to teach her how to fight. Or Connie Brockway’s All Through the Night which features a mild mannered lady widow-slash-chaperone in Regency London who happens to be a cat burglar (she was trained by her dad, also a thief) who steals jewels from members of the ton who have reneged on promises to donate money to her Charitable Society for Soldiers’ Relief. She meets her match when she accidentally steals a document that could bring down the Prime Minister, and a deadly secret agent, plucked from the poorhouse and trained to function as a lethal weapon has to stop her.

But the twenty-first century has its share of WTF plots. In Anne Stuart’s Ruthless, the spinster Elinor Harriman has to retrieve her pox-ridden mother from amongst the drug-fueled orgies of the Heavenly Host, mid-eighteenth century Paris’s version of the Playboy Mansion, ruled over by the King of Hell, a rumored disciple of the devil and drinker of virginal blood. In Sherry Thomas’s Delicious, the heroine runs away from her aristocratic family and ends up working as a chef in the house of a man whom she seduced one night a decade prior. He’s never been able to get her out of his mind, but he fails to recognize her despite experiencing close encounters like that one time this gutsy servant decided to use the master’s bath and pleasure herself while doing so. Exhibit three is Tessa Dare’s Spindle Cove series, which I enjoy not just in spite of but because of the farfetched premise that a bunch of well-bred but “sickly, scandalous, and shy” women have been dumped in a seaside village to live unmolested by the dictates of male guardians.

Then there’s paranormal. It’s not enough to have a band of brawny vampire warriors saving mortals in upstate New York from albino vampire hunters who smell like baby powder, but in one of them, Lover Eternal, a vamp named Rhage (son of Tohrture), has been cursed with a Beast that magically lives inside him and turns him into a dragon when he gets angry… or goes too long without sex. In Kresley Cole’s Kiss of a Demon King, the heroine, who has died half a dozen times, only to be brought back to life by her sister, and hero, the dethroned demon king of the title, are fated mates, but hate each other, being on (they believe) opposite sides of an old political conflict. So she captures him and sexually tortures him, then he does the same to her. Naturally, they fall in love.

Beyond plot, I actually enjoy some of the over the top language in sexual scenes. In non-erotic romance, I like descriptions of sex that make it seem ultra-pleasurable and very significant. For example, in Dare’s Any Duchess Will Do: “Her crisis broke, rocking her with waves of keenest pleasure. The climax went on and on— battering her, body and soul, with fierce, unparalleled joy.” Or in A Lady’s Lesson in Scandal by Meredith Duran: “as the pleasure built within her, pulsing, pulsing harder, spiking and splintering her into hard, fierce contractions, she did not think of anything at all; she simply gloried.”

Finally the romance. When Sebastian gives Rachel a puppy in Patricia Gaffney’s To Have and to Hold, when Christian makes his speech at the Quaker meeting in Laura Kinsale’s Flowers from the Storm, when Michael tells Rebecca, in Deidre Knight’s Butterfly Tattoo, “God help you and me both, but I am so damn in love with you.” Or when, in Julie James’ The Sexiest Man Alive, Taylor surprises superstar Jason at his movie premiere and declares her love in front of the fans and the press: “I’m here for you, Jason. Because I realized that the one person who could break my heart is the only one who should have it.”

Or, finally, this bit from Jennifer Crusie’s Bet Me:

“It doesn’t matter,” Min said. “That’s what I’m trying to tell you, it doesn’t matter what you do or say. I’m going to love you till the end of time.”
Cal looked at her, stunned.
“I know,” Min said. “It’s really un-PC. I just thought you should know that you can’t screw this up.”

I’m sure a lot of people roll their eyes at such plots, language choices, and romantic scenes, but I get real delight from these unique features of romance, even as I’m sometimes tempted to underplay them to non-fans. I don’t think a romance novel is better the more it’s like some other genre. I like it just fine as it is.

Why We Need A Black Mad Men

Can There Be Hokey Without Pokey?

11 Responses to “I Love You Just the Way You Are”