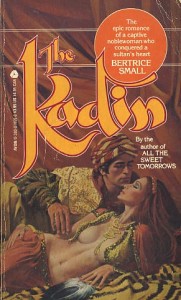 Bertrice Small. Wow. Smart Bitches Trashy Books has a pretty perfect tribute up on their page today, and I’m sure many are doing the same. Really, you only need the one. I finished it and wanted to applaud. Small was an author I admired more than enjoyed. She represented significant change in the genre even as she was quick to acknowledge being  part of a larger wave. Skye O’Malley is a heroine name you can drop in most genre circles and get an immediate response to – be it love, hate or awe. Small went out of fashion with the rest of the 70’s authors, but unlike many she never went away. Her books stayed in the shelves, stayed in the shops, stayed in the libraries. If some of her contemporaries were more visible it was ultimately Small who had longevity covered. Like her heroines, Small endured. Deservedly so.

The generation above me traded Harlequins and Regencies in big fat paper grocery bags. When the 70’s really got going strict genre lines began to develop. “Don’t give my any big books” my grandmother would tell my aunt, “I don’t really care for those.” My aunt was a major fan of The Big Books. My first one was snuck from the shelves at church and read while tucked in a corner of the pastor’s office. My second read in a top bunk with the classic after-bedtime flashlight move. My third was The Kadin. My aunt loved the book on it’s debut and raved about it to all the adults who would listen. It was scandalous. It was epic. It was everything to her. So of course I slipped it out of her room during a sleepover. In the morning I was a little stunned and she was a little outraged. After that I was firmly in the grocery bag loop and I never left it. Big books, small books, I was reading everything.

The Kadin is one of Small’s least sexual books. It’s also the one where I say she just went for it. Everything Small loved was packed into the book, especially the enduring power of female resilience. At the very heart it’s not between a man and a woman. It’s a love story centered on a woman’s power to endure. Survival is prized over all. Janet becomes Cyra and it is as Cyra that she dies. She learns to live in an alien (and fetishized, let’s not pretend) culture. The diverse women who surround her become a replacement for her lost family. Each is treated by Small as an important individual in her own right. Small was a writer who believed epic tales required epic characters. Backstories for all. Of course, being a 70’s epic, the domestic violence, underage sex and rape isn’t far behind. Slavery is viewed as either a piece of good fortune or a solution to a problem. If you want to understand the rise of the “Bodice Ripper” then Bertrice Small is an important author to study.

For now, Small’s personal author blog is still up. It’s a few years of musing about her life, her politics and the business in general. Like her heroines, she preferred to say what she thought and let others make of it what they will. To that end, I’ll say I cannot stop looking at the Life Magazine article from the SBTB tribute. It’s so 70’s it hurts. From the sheen of polyester to the All-American image of the now discredited Dailey, this is romance as I remember it. Except for Valerie Sherwood. I had absolutely no idea that The de Vil was an actual look. If only those foxes were cats. (Her books make SO MUCH more sense now. SO MUCH! I’ve read all of them, I think?) Jennifer Wilde / Tom Huff should have been in this article but then (like now) readers didn’t trust male authored romance.

Edited to add – the family has released a statement. It’s the first comment at the RT link.