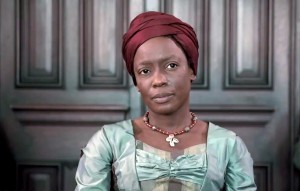 Aminata is home. As we all know home is a place you can never go again, things are about to radically change. Arriving in Sierra Leone, Aminata discovers the British are once again long on good intentions and short on follow through. While the crew and abolitionists sleep on the boats, the black settlers improvise shelters and buildings. Following the western concepts of a town they’ve adopted, a main street quickly grows. Inevitable, that means captives are marched through on their way to market. Face to face with the reality of slave takers Aminata comes to understand in a new way why good people don’t stop bad actions. Out numbered and out armed, the new community is helpless to save those bound for the life they just escaped. They still try.

I found E6 one of the most emotional of the series but perhaps not in the way intended. There is an inevitability about E6. Everything they have done to save themselves is ultimately futile. Their hard won freedom can still be taken in an instant. They cannot protect those who have no idea of the horrors awaiting them anymore than they can protect themselves. All the good intentions in the world don’t mean much to a pair of manacles and a machete. Faced with the choice of self preservation or ethical consistency, each must make a choice. By doing so, some of them will die. Almost 300 years in the future their descendants will be facing some of the same battles for some of the same reasons.

It’s a bit too simple that one of the newly enslaved reminds Aminata and Chekura of young Aminata. It’s understandable, it’s relatable, but it’s as neatly tied as the eventual series ending. I’d have preferred a young Chekura or an adult over another young girl symbolically standing in for Aminata in the cycle of violence. By the close of battle Aminata realizes that she cannot fight slavery locally, she must fight it globally. To that end she sets sail for England. There she find the free black community she’s longed for and a new life among like minded abolitionists. She also find one of her old adversaries, a man whose white guilt has led him across two nations and an ocean for an attempt at redemption. He passes his gift to Aminata in a bizarre manner before quietly slipping away. Out of character doesn’t begin to cover it. Whatever. It’s good to see Aminata with a win for a change.

Overall I was impressed with The Book of Negroes. Aminata is too perfect, Chekura is too adoring. Set against the backdrop of their larger narrative it makes sense yet also made me wish we’d spent more time with some of the more conflicted characters. The girl who volunteers to reenter slavery despite having a child to protect. The innkeeper who believes Washington is a good man, despite his slaveholding status. The abolitionist who travels from his family for years at a time but can never quite bring the trophies home. The indentured servant who realizes murder might be his only chance. The people who buy black infants like so many puppies. The conflict in Aminata where she remains in the fields by limited choice only to have it thrown in her face by others. I wanted someone, anyone, to be disappointed in or by Aminata. At the same time I wondered if that was fair. White saviors abound in fiction, is a black savior held to a different standard? I appreciated The Book of Negroes keeping it’s focus on the black communities, bringing in white characters as tokens or nemesis not as emotional cores. I wanted Rosa Lindo called out for her likely double dealing, and I wished the happiest of endings for Sam.

Final Assessment: Sweeping romantic saga of a woman refusing to give in. A –

Request: Comment freely – the series has aired several times over in multiple countries and I’ve left some key points out. Spoilers may occur in discussion. 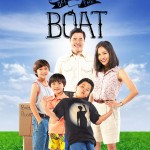 One Response to “The Book of Negroes E6”