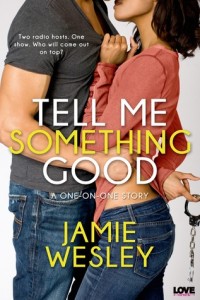 That certainly explains it. A category romance. I went in blind without reading the blurb and only knowing I’d bought a black romance on a sale. The cover lies.

Tate Grayson and Noelle Butler are radio hosts in a Dallas radio station. He talks about sports and she talks about relationships. Until one day annoyed by life and traffic they both make the mistake of calling each other’s shows and end up sharing a new show.

So far so good. Two working adults get thrown together by a business savvy boss. They don’t particularly like the new situation but are professional enough to overlook that, until ignorance becomes impossible. Add a slightly ridiculous plot twist to keep throwing them together in a more intimate fashion and you have an entertaining romance book with banter.

I liked and then I didn’t.

The turn started when Tate’s rich family connection was revealed. I’m not a fan of the millionaire/billionaire fantasy, but I was willing to tolerate it because Tate’s money was beside the point. Focus wasn’t on Tate buying things for Noelle; the story was about facing his fears and overcoming them. And what is a romantic fantasy without a helicopter ride thrown in.

I even relished the dash of melodrama in the form of Noelle’s dead parents. I too would have made that call and reacted as Noelle did after. Apart from going to an American college and getting therapy. I’m too Finnish for that and Noelle is a much healthier woman.

Then we got to the sex and I cringed. I ticked off the three most offensive words used in bad smut writing—core, centre, her sex—and suffered through the rest of the descriptions. The more Wesley tried, the less sexier it felt. And because I couldn’t enjoy the smut, I rushed through the plot.

Which is how the ending ruined what was left of a good book. View Spoiler » Noelle and Tate break up when she confesses she loves him and he’s unable to reciprocate. Instead he urges her to get that new job in Chicago. When Noelle is wrapping up her last show, Tate calls in confessing his love and telling her that by the way he bought the radio station they work in and another so she doesn’t have to move towns for a bigger audience. « Hide Spoiler

I’m not sure which I found more offensive: the public gesture or the money fixes all attitude.

Final Assessment: If category romances about millionaire heroes are your thing, this is the book for you. It wasn’t for me. D.

11 Responses to “Tell Me Something Good by Jamie Wesley”